A member of the Cub community for more than 30 years now, longtime educator, head Varsity basketball coach and Loyola alumnus Jamal Adams ’90 goes in depth about his role as the school’s Director of Equity and Inclusion. He lends a powerful and positive educational message to members of our society and offers resources to help our community better educate themselves and support their African American brothers and sisters.

(An invitation to the LHS African American Alumni Society’s State of the Union panel can be found at the bottom of the page.)

Q: The vast majority of our alumni did not have someone as the “Director of Equity and Inclusion” during their time at Loyola. How did this position come to be on our campus and what are your current responsibilities in this role?

JA: My entrance into this space started with some readings out of Georgetown University about five years ago. They were dealing with the discovery that the school had sold something like, 380 enslaved people back in the 1840s to keep the school afloat, to gather money. And they were now thinking about how they could repair that wrong. One of the first things they did was create the Director of Equity and Inclusion. After some research, I saw that this position actually existed at some of our high schools as well. (At the high school level, it was more of a retention tool as an extension of admissions.)

To Principal Frank Kozakowski’s credit, he gave me the space to go out and gather resources for a year. So, I went to about four or five conferences, including the JSN (Jesuit Schools Network) Diversity Directors—the same group that I’m now a part of the leadership structure. I went to their first meeting in Philadelphia and met some unbelievable people that gave me a lot of things to think about. So, I came back and created a proposal for Fr. Greg [Goethals, SJ ’73, President of Loyola High School], Frank and the rest of the administration team on why I thought this made sense at our school. It wasn’t an issue regarding something that had happened. I said that we always have a great report card as it relates to diversity, and I think alums would agree. We have kids from all walks of life and socioeconomic backgrounds, racial ethnic backgrounds, cultural backgrounds. That was clear. My whole thought was, “Can we be more intentional about how we understand each other, create space for each other and understand the systems and structure that create inequity in our world.” So, the idea of being “committed to justice” is that there would be some higher level of cultural competency in our community as well as understanding, empathy and sympathy around what’s going on and what people are going through.

If a Jesuit education really is based on the idea of what is a contextual education about the world and to go out and to walk with the marginalized, and to be in kinship with those who are on the outskirts of society as well as to help them find justice, then this is exactly right. I think equity and inclusion is at the heart of our Mission. Every institution that is Jesuit in nature should be directly identifying with that. And if you think about the Universal Apostolic Preferences that Fr. General Sosa illuminated about a year ago beyond discerning our spiritual life, the preferences are care for the Earth, walking with the marginalized and presenting options for a hopeful future for our youth. So, I think the work that we do at the Office of Equity and Inclusion and what we want to do going forward is in direct correlation with that.

Last week, we created a space for faculty as well as current and incoming students to discuss our national reality, to pray for healing, reflect on the issues at hand and to begin to work together to build a better future. Over 100 faculty members and over 300 students participated in these meaningful and powerful discussions.

Q: In your role, what are your hopes and expectations for Loyola High going forward?

JA: My hope is that if the fervor dies down and at some point, it will, in terms of people being in the streets, that we continue to carry Fr. Goethals’ message forward. That we will enter into hard spaces and hard conversations with a gentle and loving heart, but that we expose the truth of some of our societal ills and that we do it with courage.

Obviously the last three or four weeks in our nation have created a heightened sense around the Black experience in our country. And we as an institution, and with Fr. Greg’s letter and his proclamation at Graduation, emphatically state that we want to proclaim and stand in solidarity for those that shout “Black Lives Matter.” I think that our next frontier is to actually do the hard work of growing the whole communities—adults’ and students’ cultural competency, and particularly, engage in anti-racist work.

To clarify, it’s one thing to denounce racism, it’s another thing to say that you’re non-racist, which is almost like apathy—turning a blind eye to the issues at hand. It also includes a belief that if folks outside of the circle would just assimilate, then they would be welcomed inside the circle with open arms. To be honest with you, that apathetic stance typically causes the systems that create racism and continue to perpetuate it. To take an anti-racist stance, that would be what I am hoping for, which recognizes that no group is a monolith or flawed. An anti-racist stance would be one that we are actually and intentionally working to dismantle the systems, the structures, the policies, the procedures, that perpetuate racial animus in our community and at large.

I would hope that everyone is open to hearing different perspectives, and with that, gain an understanding that, again, none of this will happen unless we build a coalition of people of all backgrounds and races. This coalition must be actively engaged in the eradication of racism—all hands are going to be needed on deck for that. And that would be my prayer for our community, that we continue to welcome those that want to do this work, be it parents, alums, current faculty and students, and our administration. We all need to be very clear that this is a priority and not secondary. Not to be viewed as this is all we do, but that it stays as a priority, that we look at our systems and our programs and make sure that we are not perpetuating any of these systems within our community.

Q: For alumni of any ethnic background who want to educate themselves, and make positive impacts, what are some things they can be doing right now?

JA: There are so many great resources out there and so many of them have recently popped out. I have compiled a list: Loyola Resources Around Race, Racism and Privilege. Silence is compliance. Educate yourself on the historical struggles of black folks at the hands of all kinds of systems. The police system is the one we’re talking about the most right now, but if you look at education, housing, access to health care, all those things inherently have outcomes that are different for black folks than for people of majority.

Secondly, get out of your comfort zone, engage in conversations. Engage in conversation with people maybe outside of your own racial ethnic and socioeconomic status. Engage in conversation and let folks get uncomfortable, but stay open, stay in there and stay with it, stay engaged. Do understand that some black folks have grown tired of educating non-black folks, so you may have to pick your spots. Thirdly, I would say get involved. Lending one’s ear, one’s time and one’s treasure—all of those pieces help move it forward.

Q: We have witnessed protests in all 50 States and in many other countries across the world. How can the positive momentum of these last couple weeks be sustained?

JA: For real change to go forward, we have to change policies and procedures that drive systematic behavior. I believe that it is the policies and procedures that give space for the argument around police brutality. So, I think we have to continue to work at the legislative level. For our alums and Cubs of voting age, I would say to recognize that so much of our media is focused on national politics to the detriment of local politics. We have local police chiefs, DAs in addition to city councilmen races and elections to which we need to pay a lot more attention.

Q: What do you expect of every Loyola graduate, and especially for the most recent Class of 2020, going out into the world now?

JA: I’m such a huge fan of one of our most distinguished alums, Fr. Greg Boyle, SJ ’72, who often talks a lot about similar concepts that Martin Luther King talked about—about the idea of kinship and mutuality. And I am a big fan of our keynote speaker at the African American Black History Month luncheon, Van Jones, who talked about the illness of COVID-19 and the illness of racism: “The illness with COVID-19 and in these protests is teaching us about wellness and oneness.”

Our recent alums should get used to the idea of kinship and mutuality. We don’t exist without those around us, even if those communities may not be directly in line with our sphere of influence. The ability for those on the lower socioeconomic line to prosper is a benefit to our society as a whole. That we should be in kinship, that we should recognize their humanity regardless of race, creed, religion, or socioeconomic status among other identifiers. That we walk this Earth in a loving way looking at every human being and seeing them and respecting the appropriate level of dignity. And specifically, to what’s going on in our world today as protestors of all shades are descending on all 50 states and around the globe demanding justice and equality, that we lend our voices and we lend our power to these causes. And we see that our brothers that are suffering—maybe it’s race, maybe it’s homelessness, maybe it’s our immigrant brothers and sisters, our neighbors, that we are willing to lend a helping hand and it’s in our capacity to help. Get involved. Get involved! Take the Grad at Grad. And don’t make them trite words. Make them your world view and a way of living.

Adams is also a member of the LHS African American Alumni Society. He and the rest of the LHSAAAS invite you to participate in their first-ever State of the Union event on Sunday, June 14th at 2 p.m. via Zoom. RSVP today 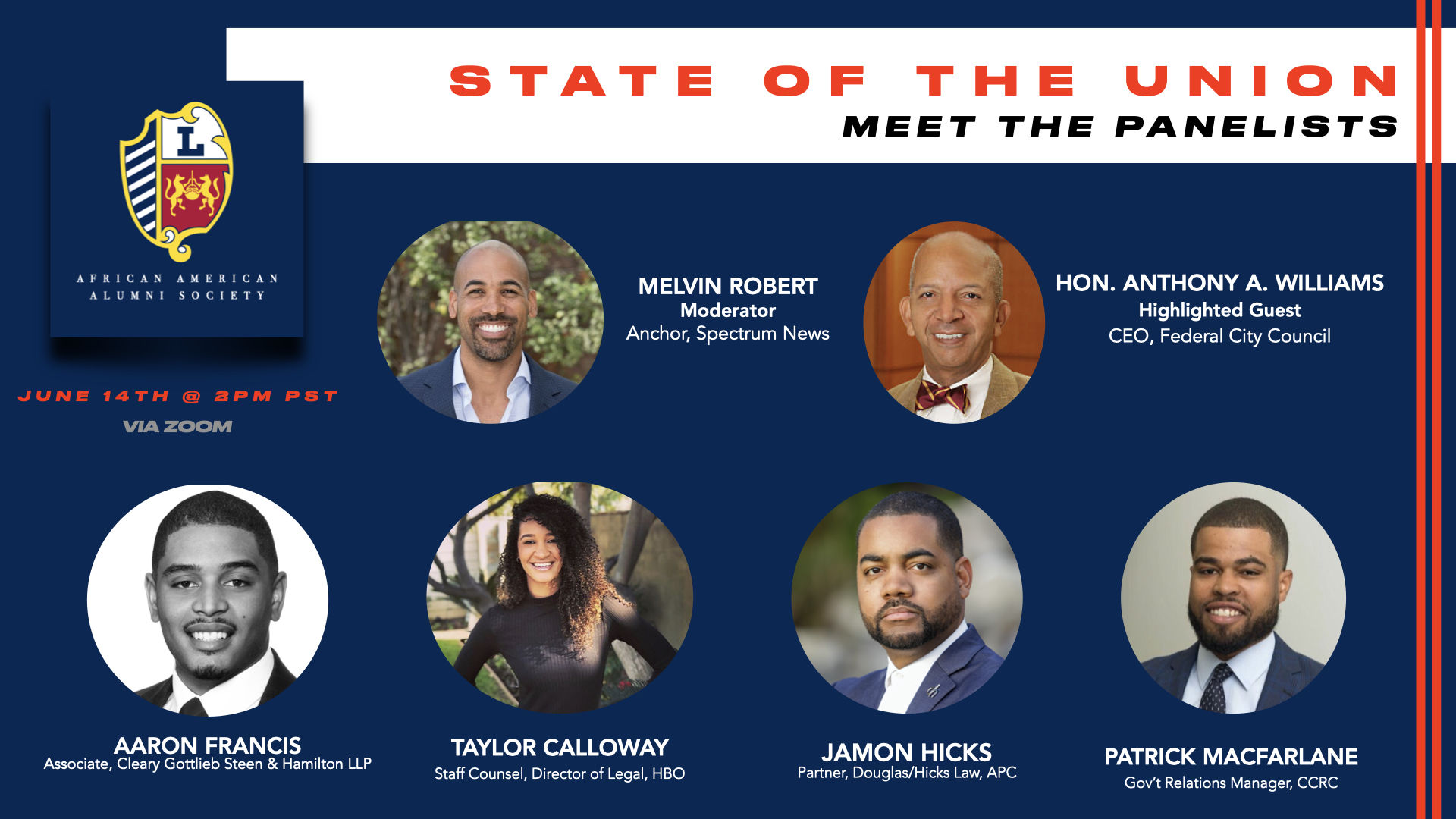 Additionally, please view the “Cubs4Cubs: Small Business Directory” story in this edition of Cub Chronicles to see a list of some Black alumni-owned businesses and ways that you can support our Loyola brothers. 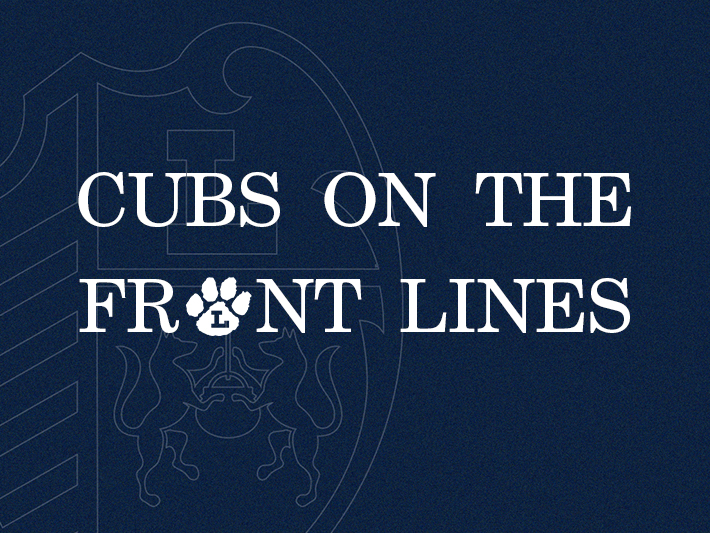 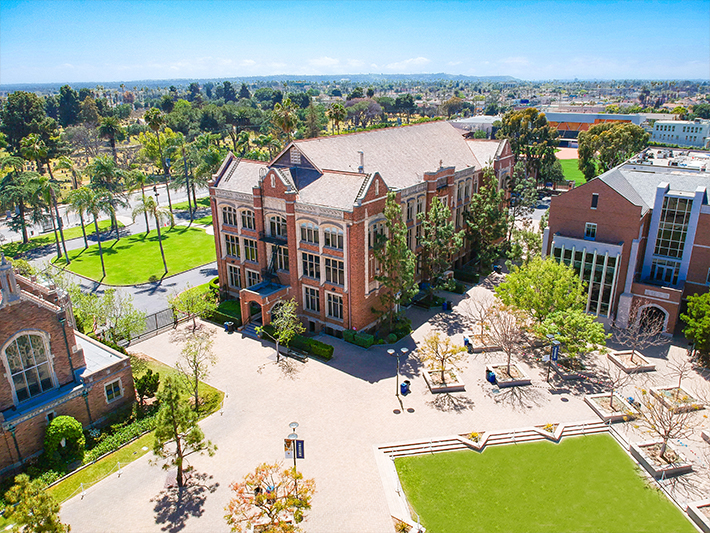 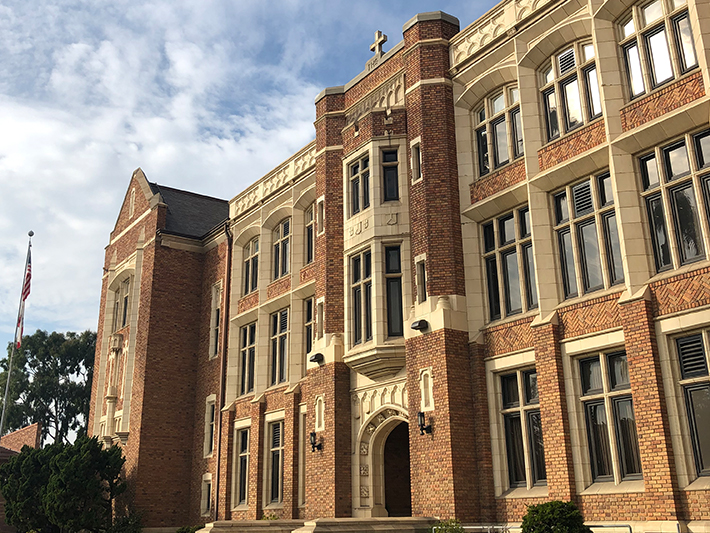 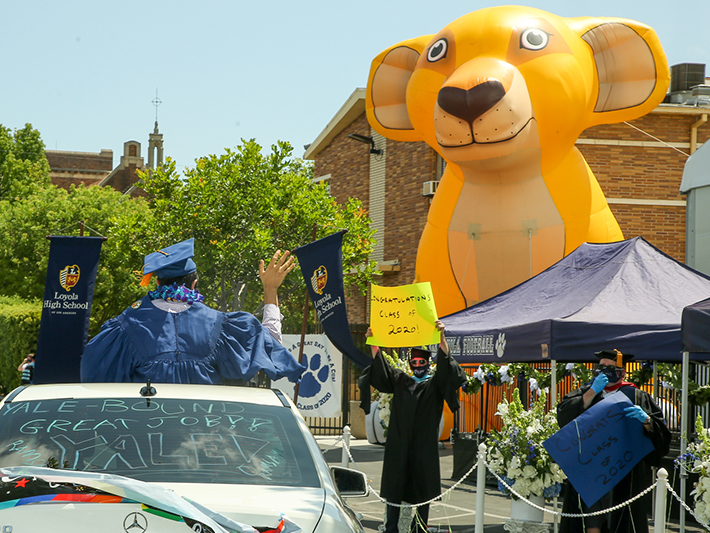 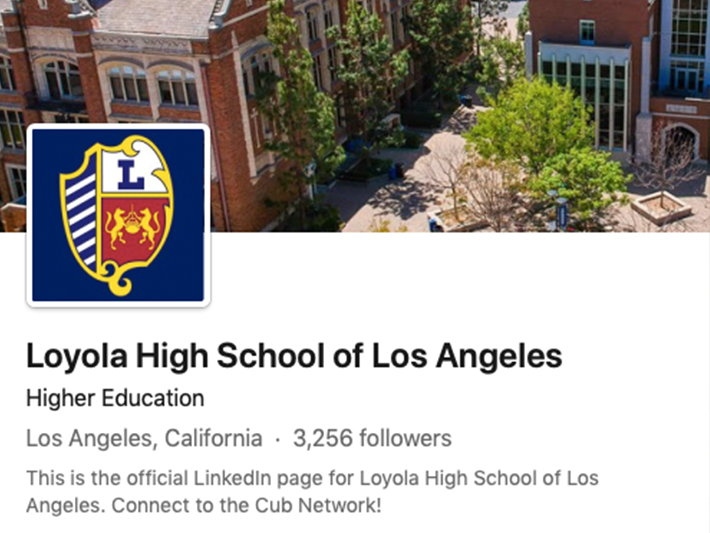